Prize Bond 100 draw result and schedule 2022. The prize bond purchasers should get latest updates of National Savings 100 Prize bond. The winning numbers of prize bond 100 are given for the users and they should look at the list of the draws of the prize bonds. The old draw results are also shared and the users can look for the prize bond result by selecting draw # numbers of 100 prize bond.
The users will find each prize bonds updates timely and accurately. 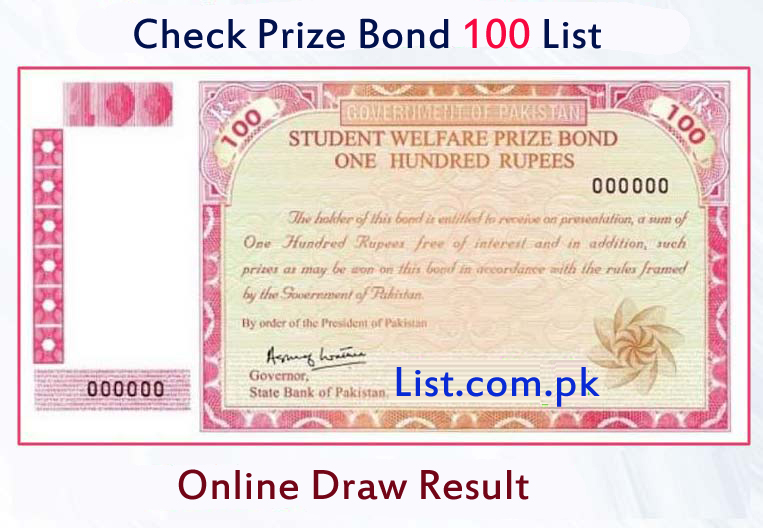 Prize Bond 100 - A prize bond is new and easy way of earning profit and the users can become rich by trying their luck. This prize bond scheme was introduced in 1960 by State Bank of Pakistan under name of “National Prize Bonds”. This prize bond scheme was launched under governing rules and regulations and all operations of Prize Bond as State Banking Service Corporation Bank is managing these rules and regulations (auxiliary of State Bank of Pakistan), which are added by authorized Commercials Banks and National Savings Centers.

The users should note that National savings centers and all commercial banks are authorized to sell the prize bonds to the general public and CDNS collects the amount and no other center is allowed to sell the prize bond. The government has introduced the prize bond scheme with the concept to provide the opportunity to the poor people to invest their hard earned money in safe and secure scheme and win their prizes, which can change their destiny, if their prize bonds are included in the winners list. The investment of money in the prize bond purchasing is the easiest and safest way of earning profit and it facilitates the people to become rich in short possible time.

Central Directorate of National Savings / National Savings Center has the particular drawing system to conduct the 100 prize bond draw during a year and the drawing system is also called the Hand Operated Drawing Machines (HODM). The prize bond winner must en-cash their reward money before 6 years after the draw and beyond this period, the winning person will not be eligible to get the reward money. The winner should get the prize money from any branch of State Bank of Pakistan after submission of the CNIC and the claiming form.

The prize bonds have gained the popularity in Pakistan and CNBS has started the premium prize bond registered. The prize bonds, which are registered by investor name, they are different from National prize bonds and prize bond is provided with the 6 months profits and it gives the chance to the users to win the prize till the required period. The prize bond 40,000 denominators will be included in this category. The SBP BSC will give the facility to the public with the introduction of the direct credit services by SMS or public bank accounts.


The people should bear in mind that this web page can give the accessibility to the people to give the current updates and prize bond result schedule, when 100 prize bond draw is held in particular time and location. Now the prize bond holders will be convinced from this page easily and they can check the updates of prize bond result 100 and other bond denominations with date, day and city wise in short time.