Prize Bond 200 draw result and schedule 2022. The prize bond purchasers should get latest updates of National Savings 200 Prize bond. The winning numbers of prize bond 200 are given for the users and they should look at the list of the draws of the prize bonds. The old draw results are also shared and the users can look for the prize bond result by selecting draw # numbers of 200 prize bond.
The users will find each prize bonds updates timely and accurately. 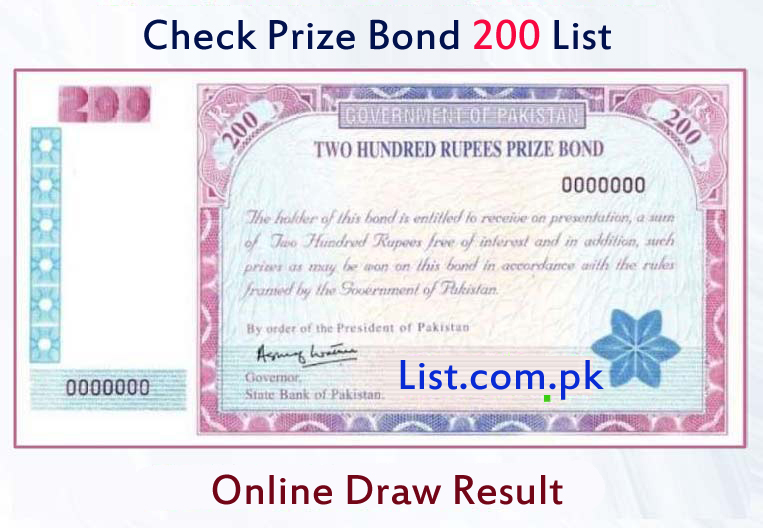 The prize bonds were introduced in sub continent for the first time and at that time the prize bond denominations were Rs.10 and 100. When Pakistan came into being, the concept of National Prize bond was emerged under regulations of ‘Central Directorate of National Savings’ (CDNS) and different bond denominations were issued in Pakistan, which were comprised of 5, 11, 50, 100, 500, 1000, 5000, 10000 and 25000. Each bond denomination is different from others and they are added with different prize proportions and the circulation of prize. The Prize bond result 200 and other prize bond result are provided to the winners on three ranks including first, second and third. The customers need to check 200 prize bond list 2022 on this page.

The National Saving Center (subsidiary of State Bank of Pakistan) and all branches of the commercial banks have the authority to issue prize bond 200 or other prize bonds. The concerned authority has developed their common drawing system of the 200 prize bond draw and other prize bond draws. The committee is comprised of the officials from State Bank of Pakistan (Banking Service Corporation) and Directorate of National Banking Center to announce the Prize bond 200 lucky draws.

The prize bond holders should note that the lucky drawn is held for four times for each denomination and it will increase the winning opportunities of the people. Pakistan Security Printing Corporation prints the entire prize bonds and they printed all of the bonds after getting the approval of the Government of Pakistan. People should check either the prize bond is original or not as scamming is common in Pakistan. They should know that each bond denomination has the specific security and there are some common features including the invisible denomination, rainbow color printing and government of Pakistan Reverse.

The State Bank of Pakistan has introduced the rules and regulations for 200 prize bond and for other categories of bonds along with other legal securities. The people should know that 200 prize bond and other denominations should be issued 60 days before the 200 prize bond draw and the people can receive their prize bond rewards within six years of the draw.